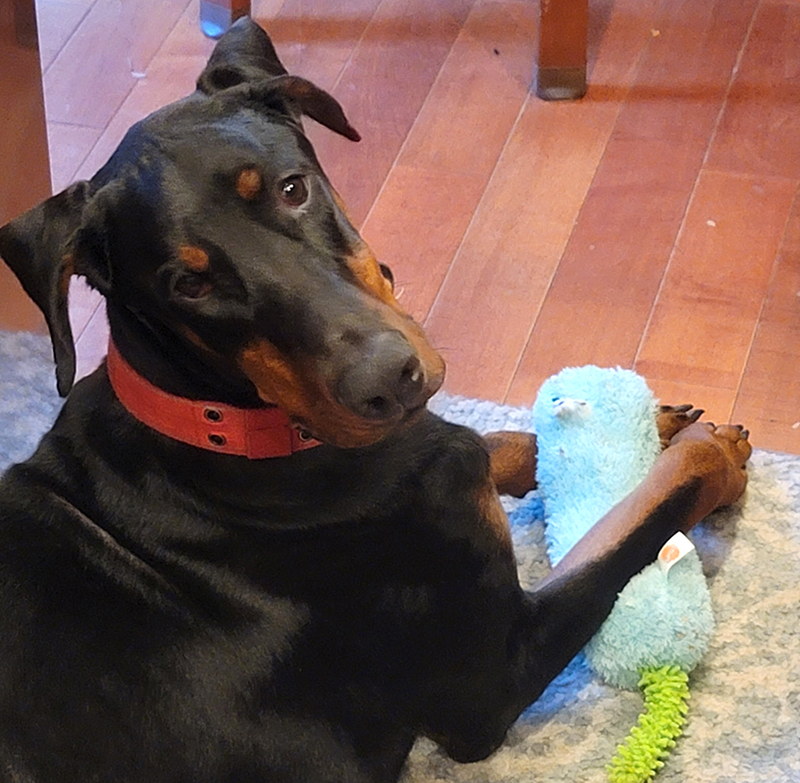 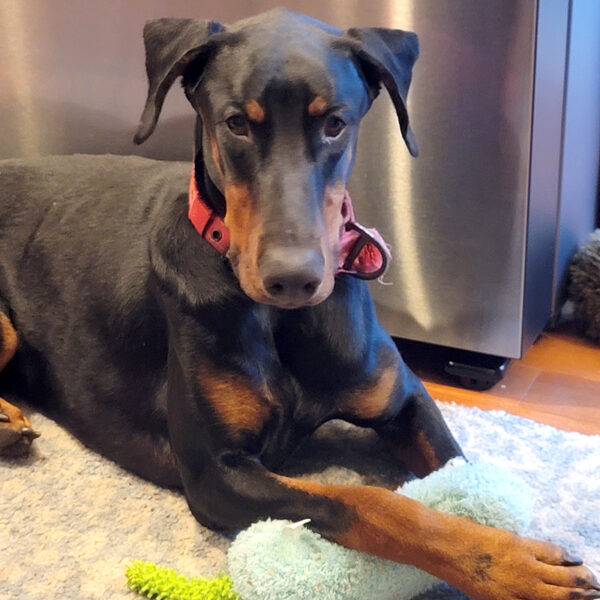 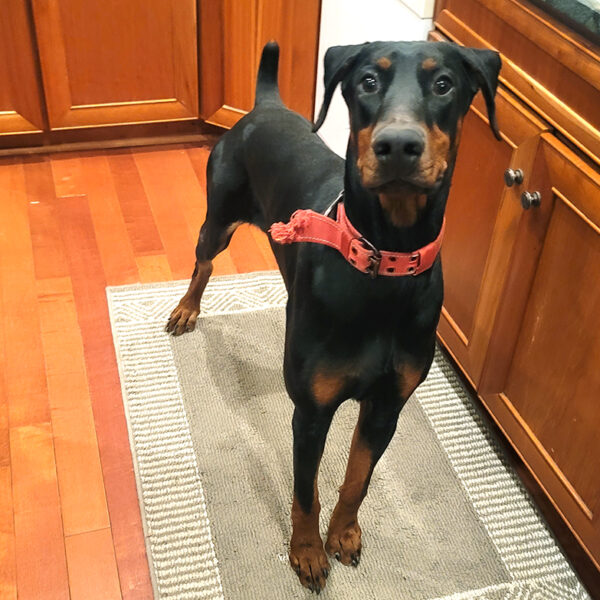 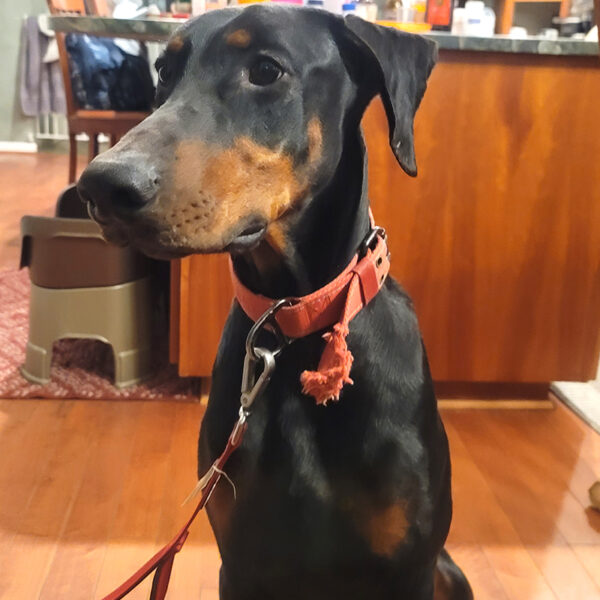 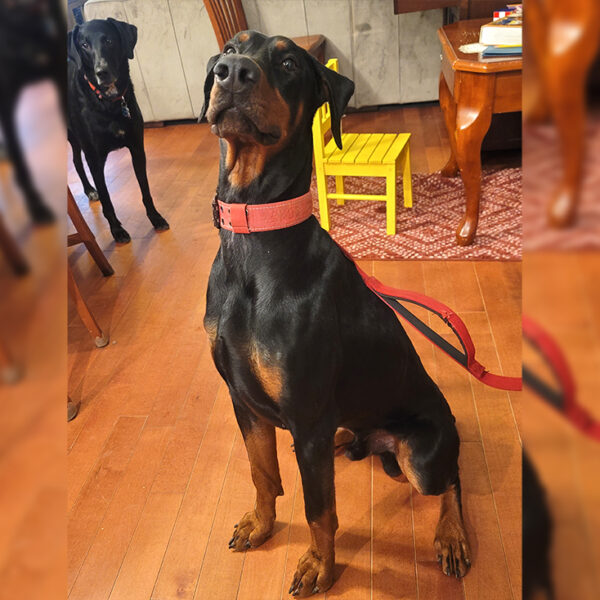 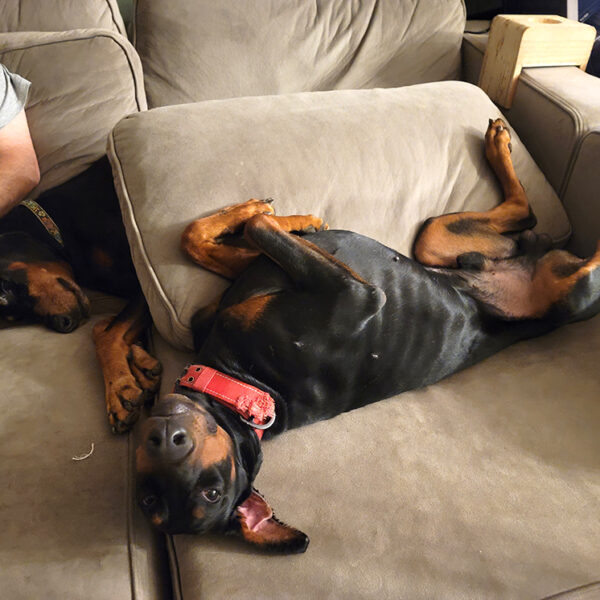 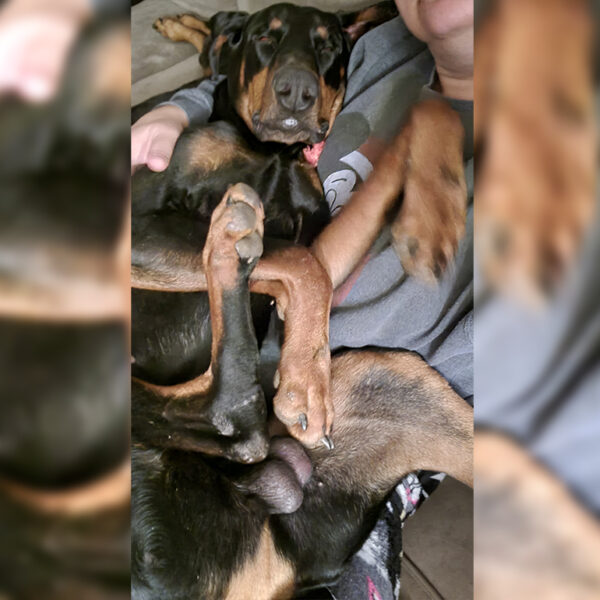 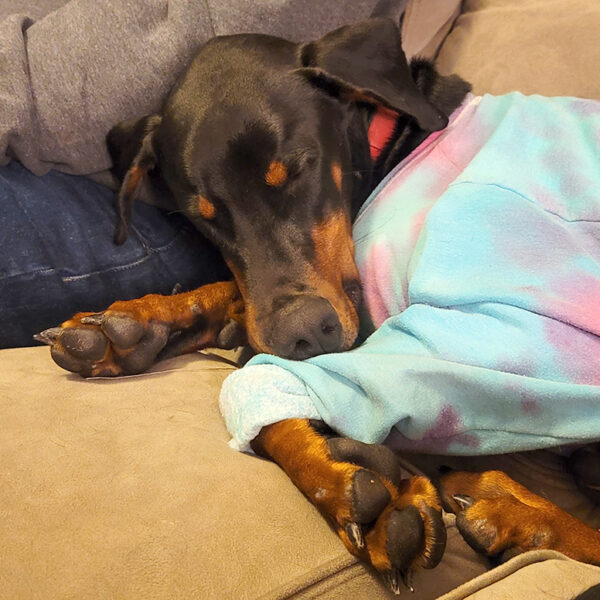 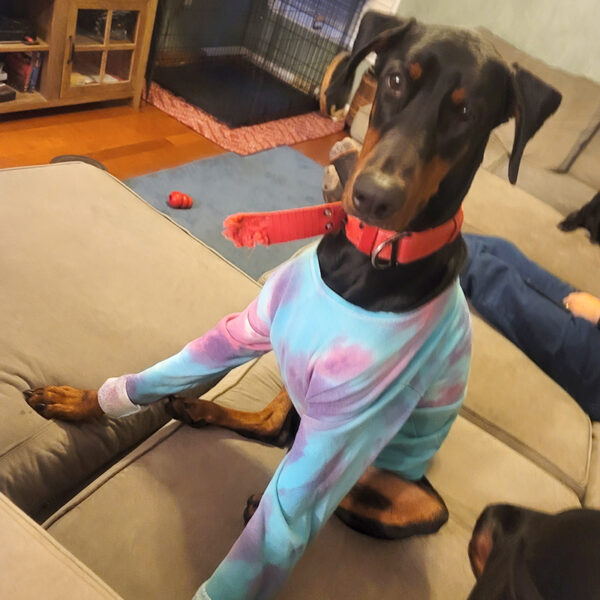 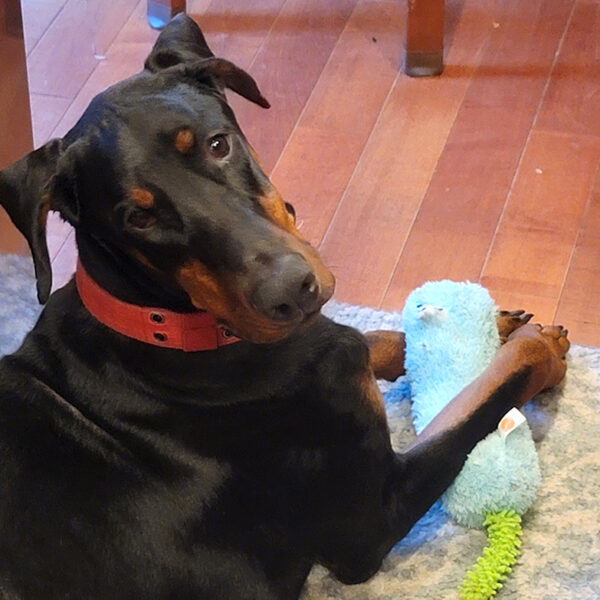 Sancho is a 1 year old male Doberman with docked tail and cropped, floppy ears.  Sancho had a rough start to life so he’s trying to make up for lost time in the learning department.  The good news is that Sancho is a super fast learner and super motivated to learn!  And he does really well with rewards; food, toys, play time, and praise all work really well for him.

I have been working with him and he’s doing really great!  He is learning to settle and be “easy”.  He knows “sit” and understands that if unprompted, a pretty sit works well for “please.”  He will sit to let you know “No, thank you.”  He is also becoming a pro at “wait”.  He is a perfect gentleman in the car, even though it’s not his favorite, and settles quickly in the crate.  He loves, loves, LOVES his people and loves to cuddle with them, especially in the evening when his energy is spent.  I would dare say that he is an aggressive cuddler.  He will get right up in your space and throw himself on you.  He is learning to entertain himself a little bit better but still needs work.  He does, however, want to be with you at all times.  He is definitely a Velcro Dobie and a heavy leaner.  He has a ton, and I mean a TON, of energy.  He plays very well with our 5yo female dog.  We have been working on leash manners as well as reacting appropriately to distractions while walking.  He has come so far in such a short time, but he still has more to learn and will need an experienced handler until he is comfortable walking in public.

Sancho will need a quiet home, without people coming and going all the time as he struggles some with anxiety.  He is, however, very content to hang in his crate with a PB Kong in a quiet room when you do have company over.  Sancho does have some issues with sharing food, so if you have another dog, feeding separately is a must.  He would be most successful in a home where there are no other dogs (OR possibly with one well adjusted, bossy, female dog that loves to play and roughhouse.  For complete transparency, the trainer that I spoke with recommended he go to a house with NO other dogs.)  I also think he would do best in a home where he is not left alone for long periods of time.  He does settle well in in crate, especially with something safe for him to snack on/play with like a Kong, but I can tell those longer times in the crate with no interaction wear on him.  He is currently living in a home with cats.  Sometimes he can get overly excited with them.  If you have dog savvy cats, he will most likely be able to cohabitate with them in the future, but you should make plans to keep the cats safe in the beginning.

He loves to play with the foam frisbee.  He’s no good at catching it, but he loves to chase it.  He will fetch a ball, but he likes when you throw it high, rather than far.  The bouncing is exciting for him.  He is an absolute maniac over garden hoses and chasing the water.  It’s a good way to wear him out.  He is equally obsessed with the laser pointer.  And whenever you pull your phone out to check it, he immediately starts checking the ceiling watching for the reflection of light, because it’s fun to jump at.  The same is true for large kitchen knives.  He once danced his way through the kitchen during an entire meal prep because of the light reflecting from the chef’s knife on the ceiling.  He will content himself with an elk antler or nylabone, filled Kong, or a puzzle ball with kibble.  He plays hard and sleeps hard.  In the evening, when all his energy is spent, he loves to get on the couch and force you to snuggle him.  He will lean into you until you have no choice but to wrap your arm around him.  He will back up and plop his butt right on your lap.  He will roll over and stretch.  He likes to be held like a baby when he’s sleepy.  He loves a good ear massage or chest rub.  He will get all zen with his eyes half closed and sometimes drool.